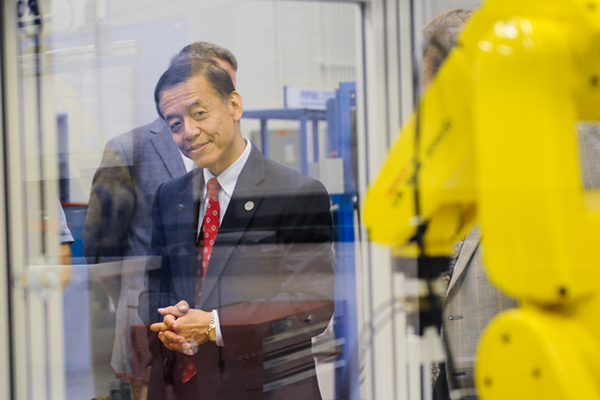 Maury County is making its presence known on the international stage, attracting attention from Eurasia, the Far East and Europe.

Maury County Chamber and Economic Alliance officials are hoping that global interest translates into more foreign investment in the area.

“In economic development, a big portion is having the relationships and contacts that could result in some type of lead or a company looking to potentially locate or expand in the area,” Evans said.

Evans said Kato works with existing Japanese employers and companies that may consider the area for expansion or a new location. The visit served as an example of Maury County’s openness to foreign investment, he said.

Earlier this month, a Serbian delegation of educational professionals visited Maury County through a Congress-sponsored program. The group was tasked with examining America’s approach to higher education and youth employment issues.

The Serbian officials toured the Northfield Workforce Development and Conference Center in Spring Hill to discuss post-high school educational initiatives and determine which of those practices could be implemented in their country.

Serbia has about a 50 percent youth unemployment rate.

The state also has programs to help local businesses sell their products in the global market.

In April, the MCCEA and Tennessee Department of Economic and Community Development hosted a seminar highlighting the state’s TNTrade program.

The initiative provides small- and medium-sized businesses with guidance for tapping into international markets. Export specialists from the European Union, United Kingdom, China and Latin America spoke with local business owners about state programs designed to get their products abroad.

International interest in the U.S. market is rising, Evans said.

“The time is very prime for us to take advantage of that,” he said.

“What I think we are really trying to do is make a considered effort to get that word out there and be proactive about developing some new relationships,” Groth said.

Groth is gearing up to participate in the Tomodachi-Mitsui and Co. Leadership Program from June 20-28. Ten public and private sector professionals will travel to Japan to network with business and government leaders and promote U.S.-Japan relations.

I am really excited about the opportunity to develop some long term relationships that can be beneficial to Maury County and the Maury AllianceTravis Groth, MCCEA Economic Development Director

“I am really excited about the opportunity to develop some long term relationships that can be beneficial to Maury County and the Maury Alliance,” Groth said.

The MCCEA official is returning to Japan after a seven-year absence.

Groth lived in Japan for five years, three of which he participated in the Japan Exchange and Teaching program. His primary duties were instructing students in English, but he also served as a cultural ambassador.

During his last two years in Japan, Groth worked for a private company preparing managers and engineers for overseas business trips.

Maury County has also received other international interest from a European tile manufacturer.

UST Inc. is slated to open a 500,000-square-foot North American headquarters, manufacturing center and distribution hub in Mt. Pleasant. UST will run the plant, but the business is a subsidiary of a parent company that will oversee its operations.

Economic officials have not released the parent company’s name but have said the company started in the 1960s and has operations in Italy and Russia.

The new facility would represent about a $55 million investment in the area and employ about 180 full-time employees when fully operational.

No timeline has been released for the plant’s construction.