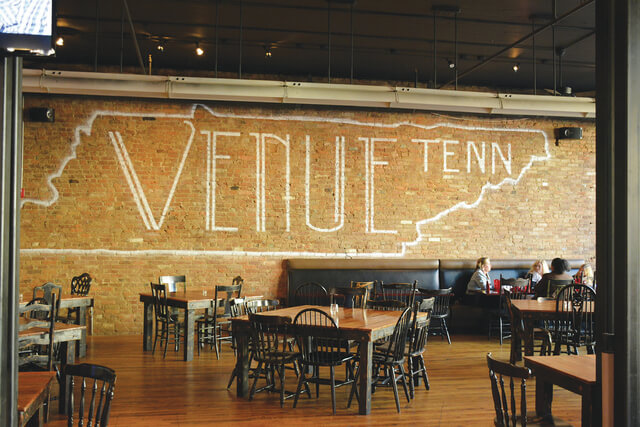 After three years, a once-vacant building in downtown Columbia has a new life filled with meals and music.

Venue Tenn, 117 W. 7th St., was recently opened by co-owners Cody Sumpter and Emily Terrell. The couple also operates another location in Spring Hill — Venue 10 — which has been open for a little more than a year.

Columbia seemed like a good place to open another branch, Sumpter said.

“We had been batting it around a little bit, and then it was just too nice of a place, with everything that is happening in Columbia, to say no,” he said. “The square is beautiful.”

Walking into the West 7th Street building, Terrell said she was sold at first sight. A building with original hardwood floors and exposed brick basically sealed the deal for a new location, she said.

“It was just a huge seller for us,” Terrell said.

Sumpter said Venue Tenn was what the couple had envisioned for their first location. The downtown building was a perfect chance to see their vision realized, he said.

The couple hopes Venue Tenn will be a destination spot for people visiting the town.

The second level will host bands and other events. The lower level has a full-service restaurant but also will have a place for live music.

The alley way, known as Whiskey Alley, came with the building and will be an area for patrons to gather during the warmer months.

“We like to say that we have something for everyone. If there is ever a request for something in particular, we will make it happen,” she said. “We don’t ever want to say, ‘We can’t do that.’ We will work to make what our customers want, happen.”

As former bartenders and servers, Sumpter and Terrell are well-versed in the hospitality field. That experience, they hope, will translate into a customer-friendly atmosphere at Venue Tenn, they said.

“We are in the hospitality industry, and that’s what we do. Opinions are welcome. The more feedback that we get from our guests, the better we can be,” Terrell said.

“The good and the bad,” Sumpter added.

Another selling point for downtown was the camaraderie among other business owners, the couple said. The local community has welcomed them with open arms, Sumpter said.

“It is great to see that there are so many people on the square trying to make it happen. It’s more of a team effort than it is against each other, which is great to see,” he said.