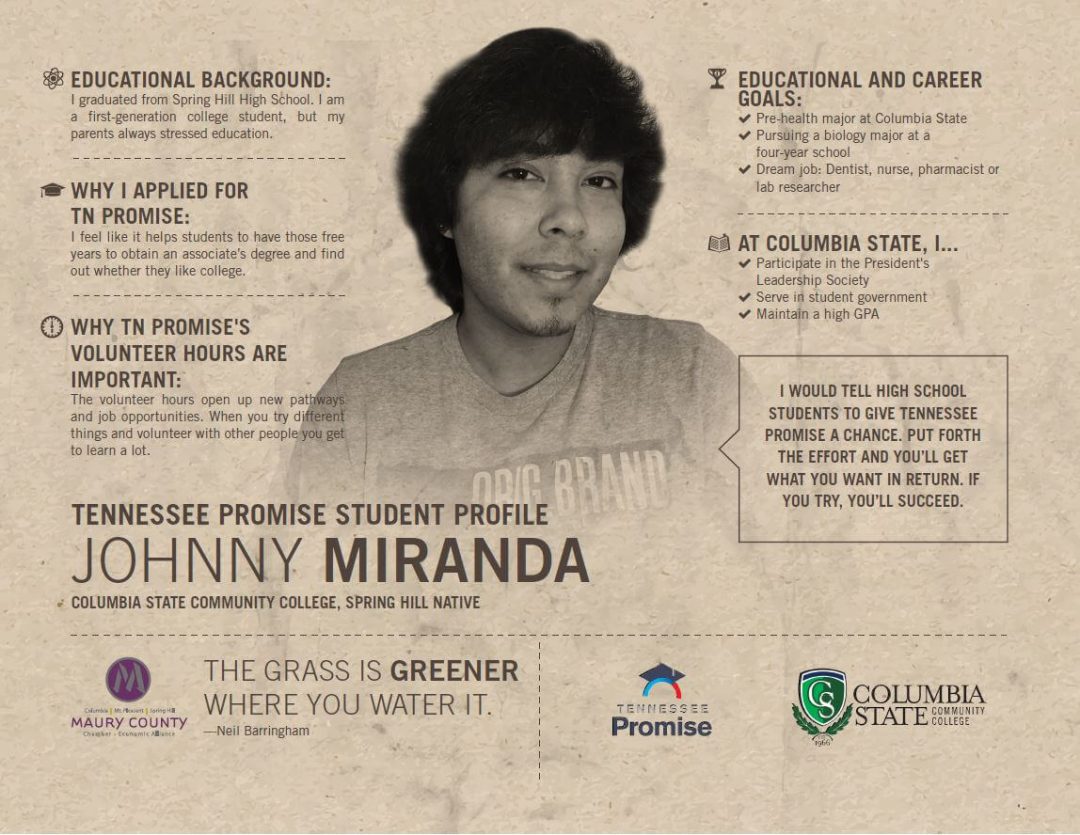 SPRING HILL, Tenn. – Nobody in Johnny Miranda’s family had ever attended college. But as he and his sister grew up in Maury County Public Schools, their parents were determined to help them reverse the trend.

Johnny’s sister made the leap to higher education. And now, thanks to a boost from Tennessee Promise, a first-of-its-kind scholarship program available to Tennessee students since 2015, Miranda is thriving in his second year at Columbia State Community College and looking ahead to the next step in his educational career.

“I am a first-generation college student, but my parents always stressed education,” Miranda said. “Tennessee Promise is very valuable, because it helps me and my parents. All I have to do is help with the books.”

Tennessee Promise is a last-dollar scholarship that provides free tuition to Tennessee’s 13 community colleges and 27 colleges of applied technology. It is paving a financial path to higher education for thousands of Tennessee students who might otherwise be excluded from the opportunity.

Miranda, a pre-health major at Columbia State, heard about the program from a teacher at Spring Hill High School, from which he graduated in 2015.

“They kept talking about Tennessee Promise, and it sounded like it would be beneficial to have it,” said Miranda. “I have friends who are going to four-year colleges and dropping a ton of money. Honestly, I’m glad I had Tennessee Promise.”

Miranda was initially interested in attending an in-state four-year university to study computer science, but the chance to start closer to home for free easily won him over, especially since his parents were already paying for his sister’s schooling.

“My parents were excited about the opportunity for me to get two free years of college,” Miranda said. “I feel like it helps students to have those free years to obtain an associate’s degree and find out whether they like college.”

Tennessee Promise applicants who completed a Free Application for Federal Student Aid (FAFSA) form by January 17 remained eligible for the program. They will subsequently be paired with a tnAchieves mentor who helps guide them through program requirements and the college preparation process. Maury County exceeded its mentor goal for the 2016-17 school year.

“Mentors are important because they’ve already been through the education process,” said Miranda. “They can give a different perspective on how it went for them, because not all parents have been to college.”

Tennessee Promise students are also required to complete eight volunteer hours each semester – a number Miranda had no problem meeting and encourages others to fulfill.

“The volunteer hours open up new pathways and job opportunities,” Miranda said. “Some people just do the same stuff over and over, but when you try different things and volunteer with other people you get to learn a lot more.”

Miranda says his college experience has been successful so far. He participates in Columbia State’s President’s Leadership Society and Student Government Association and maintains a high GPA.  Once he graduates, he is eager to continue his education at Middle Tennessee State University, where he plans to pursue a biology degree.

“I want to keep the opportunity for being a dentist, nurse, pharmacist or lab researcher while keeping my roots in biology,” said Miranda. “As long as I enjoy my job I’ll be all right.”

For now, he encourages others to capitalize on the same opportunity he received.

“I would tell high school students to give Tennessee Promise a chance,” Miranda said. “Put forth the effort and you’ll get what you want in return. If you try, you’ll succeed.”

More information about Tennessee Promise can be found at tnpromise.gov.