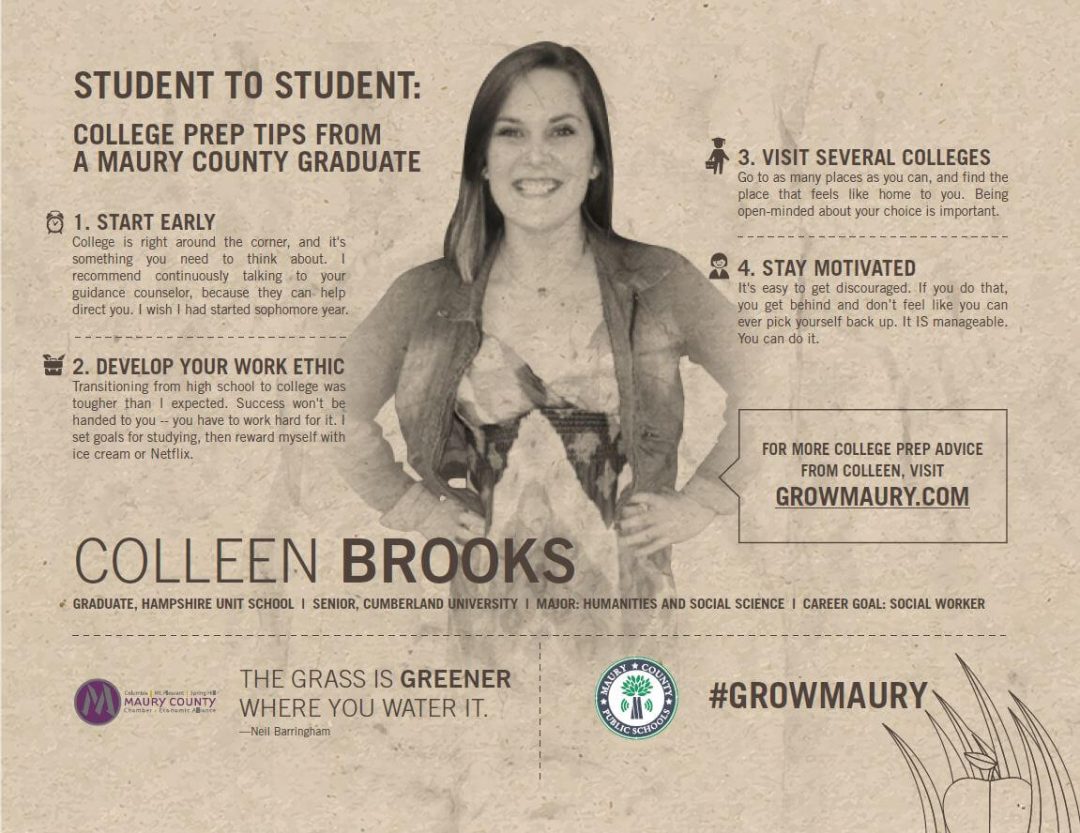 LEBANON, Tenn. – Colleen Brooks wasn’t sure college was for her.

She had taken the ACT four times and scored a 19 every time. She badly wanted to pursue higher education but didn’t know whether a college would see her as a fit.

“I bawled my eyes out because I didn’t think college would be an option for me,” Brooks said. “I worked really hard, but I still seemed to be average.”

Fast forward five years. Brooks, a Hampshire Unit School graduate, is in her final semester at Cumberland University, where she will earn a degree in Humanities and Social Science and head to graduate school. Thanks to perseverance and hard work, she is two years away from a Master’s degree and a career in social work.

What made the difference? Brooks says she found the school that fit her needs and pushed through every barrier in her way.

“I visited colleges and found out they were looking for more than just good grades,” Brooks said. “Cumberland was perfect for me, because it had a small community feel. They read the personal statement on my application and decided to take a chance on me.”

The transition from high school to college challenges many students like they’ve never been tested before. Brooks says she learned some lessons from the experience that she’s happy to pass along.

1. Start Early
Brooks didn’t start seriously thinking about college until her junior year, when she first took the ACT. She believes that was a mistake.

“I would have liked to have learned more about college during my sophomore year,” Brooks said, “because that would have given me time to visit more places and put more thought into where I wanted to go.”

While Brooks insists she would have ended up at Cumberland anyway, she says starting her preparation process earlier would have made her senior year much less stressful.

“Senior year I was cramming in more than necessary, so getting an idea about it sophomore year would have been beneficial,” Brooks said. “My sister [a freshman at Lipscomb University] did that, and she was able to visit more colleges.”

The key, according to Brooks, is connecting with the guidance counselor.

“I recommend continuously talking to your guidance counselor, because they are such an asset,” said Brooks. “They can give you answers to questions you didn’t think you’d be able to figure out.”

2. Develop work ethic
College wasn’t what Brooks expected. There was more free time than she thought there would be, but less accountability to help her manage it.

“In high school they’re constantly reminding you of deadlines,” said Brooks. “That’s not what happens in college, so you need to be thinking ahead of time.”

High school students can prepare for the transition by assuming more responsibility for their schedules rather than relying mainly on parents and teachers. That means keeping a calendar of key tasks.

“I think getting some type of planner is very beneficial; I cannot get through my week without it,” Brooks said. “Writing things down and being able to see what you have due is key.”

Brooks credits her high school athletic career for instilling a strong work ethic, and she admits it has carried her through many challenges.

“I was not the star athlete – I was more of a benchwarmer,” Brooks said. “It taught me that things won’t just be handed to you – you’ll have to push and work for them.”

3. Visit multiple schools
Brooks is a firm believer in traveling to as many potential schools as possible.

“Go to as many places as you possibly can,” Brooks said. “Choose the place that feels like home.”

Sometimes that might mean listening to your own preferences rather than outside pressure.

“Being open-minded is important,” said Brooks. “Everyone is throwing different options at you, but think about what is best for you to succeed, grow and be happy.”

While the primary drivers of the decision should be academic in nature, Brooks is quick to assert that education is far from the only reason to choose a school.

“Transitioning from being a senior in high school to a college student was tougher than I anticipated,” said Brooks. “It’s about more than getting a degree; it’s about growing as a person.”

4. Stay motivated
One of the toughest parts of preparing for college is the large checklist of important items to accomplish.

“You can feel overwhelmed when everything is hitting at once,” Brooks admits. “Being goal-oriented and motivated is the most important thing.”
Brooks motivated herself by setting fun rewards for accomplishing her goals – a practice she continues in college.

“I set goals with studying habits, then reward myself by going out and getting ice cream or watching Netflix,” Brooks said.

She believes the same approach will work for high-school students making such an important decision while balancing the demands of schoolwork and extracurricular activities.

“You can get discouraged very easily,” said Brooks. “If you do that, you get behind and don’t feel like you can ever pick yourself back up. It is manageable. You can do it.”

Brooks points to her own success as encouragement for other students experiencing the excitement and pressure of college preparation.

“I thought I wouldn’t be able to succeed,” Brooks said. “But college has been better than I could have imagined.”