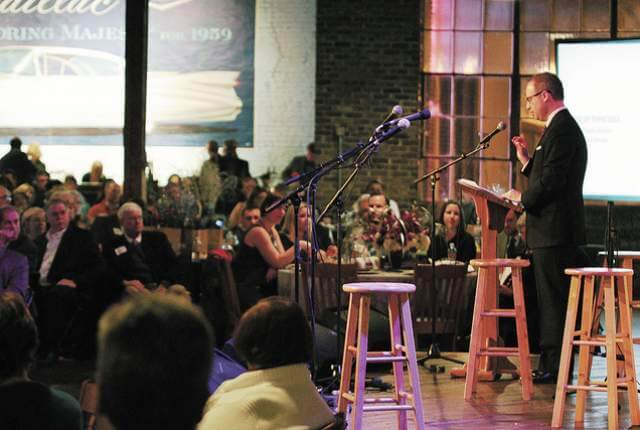 Imagine a bustling agricultural supply business in downtown Columbia around 1907. The upper 8,000—square—foot floor of Porter Walker is filled with mule harnesses, wagon parts and the like. By the 1940s, imagine then that the phosphate industry transfigured that same upper floor to creak with the supply bulk of industry — hard hats, safety glasses and bottled water.

On Feb. 5, yet another incarnation of that same square footage showcased a catalog of 2014 successes and 2015 probabilities for Maury County. Two hundred and sixty members and investors of the Maury County Chamber and Economic Alliance came to call upstairs at Puckett’s Grocery and Restaurant for their annual meeting. They were rewarded by fellowship, dinner and good news. Their host was President Wil Evans, recently recognized by the Nashville Business Journal as a 40 under 40.

We will stand behind them, we will stand next to them and we will stand in front of them, if necessary, to move this county forward and make the necessary investments in public education.Drew Parker - MCCEA, Chair

Live music and festive tables were the prelude to immediate past chairman Wes Kelley’s summary of business in 2014.

“We worked with numerous companies relocating to or expanding in Maury County and were proud to announce five projects: Clarcor in Columbia, Samuel, Son &Company in Columbia, Sekisui Plastics in Mt. Pleasant, Magna Seating in Spring Hill and Comprehensive Logistics in Spring Hill — one project in each municipality culminating in 661 new jobs, over $97 million in capital investment and an average wage of over $37,000,” Kelley said.

He reported that the chamber welcomed 151 new members and hosted 44 ribbon cuttings alongside the alliance who cultivated business relationships and established leads internationally with staff travels to Italy and Japan.

With organizational groundwork established by surveying the membership, incoming Chair Drew Parker said, “When asked to rate the importance of livability factors in Maury County, number one was public education. In fact, over 90 percent of Maury Alliance respondents indicated that public education was very important. With those results in hand, Wes Kelley and local business leader Montee Sneed proposed the formation of an Education Task Force.”

The Education Task Force will focus on four areas: to promote Governor Haslam’s Tennessee Promise, to support the Maury County School Board as they participate in the Tennessee Center for Performance Excellence Program, to promote the achievements of Maury County Public Schools with a full marketing campaign and to advocate for new and improved school facilities.

“We will stand behind them, we will stand next to them and we will stand in front of them, if necessary, to move this county forward and make the necessary investments in public education,” Parker said.

He also announced that the chamber will unveil a new website and mobile application in the near future.

The event speaker Ted Townsend, Chief of Staff for the Department of Economic and Community Development in Tennessee, charted the significance of completing the Tennessee Promise. The ability to keep the ever increasing high tech jobs that are flowing into Tennessee depends on a more highly educated population than the state presently commands. Townsend assured that the Tennessee Promise can be the fulfillment of that need offering 2-year tuition — free education to a community college or technical school.

The evening closed with a presentation of the first Maury County Economic Impact Award, extended annually, to one employer based on capital investment or reinvestment, jobs, payroll and focus on community well being throughout the previous year. Kristy Bergstrom, Mike Rayburn and Jack Cobb accepted the honor for General Motors of Spring Hill.

“Uplifiting and informative,” said NeXpiria Business owner Joel Friddell, “Wes Kelley and Drew Parker gave rousing calls to action and demonstrated that The Chamber has a depth of strong leadership. As good leaders do, they challenged us all to participate in shaping the future of the county.”

The square footage magic continues. Another economic surge is brewing and Team Maury is on it.