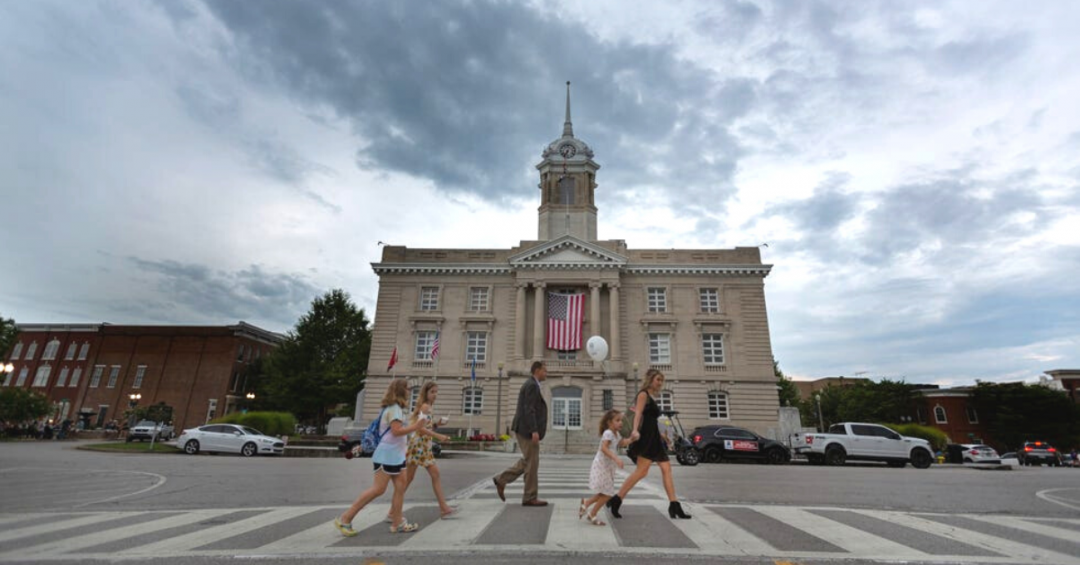 Lifelong resident of Columbia Don Morrow, 66, remembers riding his bike up Golston Hill as a youngster, where apartments now sit overlooking James Campbell Boulevard. The back drop back then was wide open green space, rolling hills and a massive sunset that illuminated the city of Columbia.

“We’d ride up there and stay for hours just talking and hanging out. Then, we’d head back home for dinner when it started to get late,” Morrow said.

He said a street sign on the outskirts of Columbia describes perfectly the city’s current state as the county seat of Maury County, saying “where Old Southern charm meets new Southern progress.”

According to local leaders, people are moving to Maury County in droves because of the manufacturing industry, low taxes, home prices, rural open spaces and strong values.

“I think a lot of people are drawn to Columbia because of the landscape too,” Morrow said. “When you drive around, like I did last Sunday on an afternoon drive, you see the beauty of the rural, agrarian roots of Columbia.”

Along Highway 31, one can see where rural farm life, history, residential growth  and industry meet. Rippavilla historic pre-Civil War site, faces the construction of the two million-plus square foot electric car facility being built at the GM plant. New neighborhoods and homes are sprinkled along the highway amid red barns and farmland.

The picturesque sights coupled with a growing business community and a quaint downtown has drawn attention.

Maury County ranks number one as the fastest growing county in Tennessee.

According to the 2019-20 U.S. Census, data shows Maury County has a growth rate of 2.89%, surpassing neighboring counties for the number one spot over Williamson and Marshall, which rank No. 2 and No. 12, respectively.

“This census data simply confirms what thousands of people and multiple companies have already decided for themselves.”

Wil Evans, president of Maury County Chamber & Economic Alliance, said that one of the major factors in Maury County becoming the fastest growing county in Tennessee is its establishment as a manufacturing hub.

“The main driver of growth in Maury County is also the overall growth in Tennessee and the Middle Tennessee region,” Evans said. “We are located in Nashville’s Metropolitan Statistical Area, which plays a role in attracting businesses. We are close to a major city and an hour from the international airport. But we have more affordable options here and great local amenities.”

Evans emphasized that Maury County has seen much growth in its manufacturing industry over the past few years, and especially in just 18 months.

The trajectory of growth has trended upwards for Maury County over the last several years, Evans said.

Since 2014, Maury County has attracted 37 economic projects, bringing over 6,400 jobs and $5.5 billion in capital investments. Of those investments, almost $4.3 billion has been generated in just the past 18 months.

Columbia Mayor Chaz Molder said the county snagging the number one spot for growth is not surprising.

“The trends we’ve seen over the last three years in Columbia alone seem to support that, Molder said. “A prime example of the growth, specific to Columbia, is that we are seeing residential-based applications coming through our Planning Commission during a month’s time that exceed what we were seeing in a year’s time less than 10 years ago.”

According to leaders in the Maury County School Public School District, who are planning for new schools, almost 6,000 new rooftops are expected in Columbia in the coming years.

In 2021 alone, the progress continues with the following:

The announcement followed the project announcement in October that GM will manufacture luxury electric SUV, the Cadillac Lyriq at its Spring Hill plant, also an investment of $2 billion.

Gov. Bill Lee touted the Ultium project as the largest single investment by a company in the state’s history.

In early May, tortilla machine-maker JC Ford Company announced that it is moving its California-based headquarters to Maury County investing $30 million and bringing 210 new jobs.

Connie Ruhe, 88, matriarch of the JC Ford Company family said she told her son Scott Ruhe, company president, “you ought to jump on it” in purchasing a manufacturing facility in Maury County.

“It’s a beautiful place,” she said about Columbia at a chamber welcome celebration in May at The Antrium historic venue.

“It’s about the low taxes, people and schools that brought us here. Everyone has been so helpful.”

In January, Documotion Research, Inc., a leading U.S. manufacturer and promoter of printing and patented proprietary products, selected Columbia as its next manufacturing site, bringing an investment of $9.3 million and 80 jobs. In September 2020, Smile Direct Club announced a state-of-the-art manufacturing facility in Columbia, bringing an invest of $34 million, creating more than 600 new jobs.

“As the fastest growing county in Tennessee, Maury County has positioned itself as an ideal place to live, work and raise a family,” Lee said. “The community’s record growth is a testament to Tennessee’s strong values and business-friendly environment, and we’re committed to building upon this success for years to come.”

Values, business on a handshake

According to Morrow, chairman of the Maury County Commission, he believes new residents enjoy the slower pace in Maury County compared to other bustling city’s like New York.

“We have a slower pace here. We even talk slower,” he said. “We still do business with a handshake.”

Tennessee is also a conservative state, which he said attracts some.

“Some are trying to escape the madness and seek something more stable,” Morrow said.

Maury County Mayor Andy Ogles says Maury County is a place where, once it’s experienced, one will “never want to leave.”

“Tennessee as a whole is a special place, but Maury County in particular shines bright due to our small town charm, big city amenities and good old family values,” Ogles said.

According to Ogles, people are Maury County’s biggest asset.

“Though we are growing fast and serve as one of Tennessee’s economic engines, what truly makes our county special is the people, and that close knit, small town vibe is palpable as you walk our downtown communities.”

Ogles was instrumental in organizing the county’s first Mulefest celebration  when the traditional annual Mule Day was canceled due to COVID-19 last spring. The two-day event drew over 30,000 people to Columbia’s downtown area, the most in the city’s recent history.

“Whether we are taking our family bowling and laser tag at Tenn Pin Alley, touring our many historic sites or playing in our multiple parks, Maury County is a special place that once visited, you’ll never want to leave,” Ogles said.

“I’ve seen a lot of changes,” Morrow said. “I hope it’s for the best. I think the question right now is how do we maintain sustainable growth?”

Columbia Mayor Chaz Molder, who grew up in Columbia, said the most important piece is preserving character throughout the growth spurt.

“After all, much of the reason for this growth and progress is due to the charm of our community, and the quality of our people.”