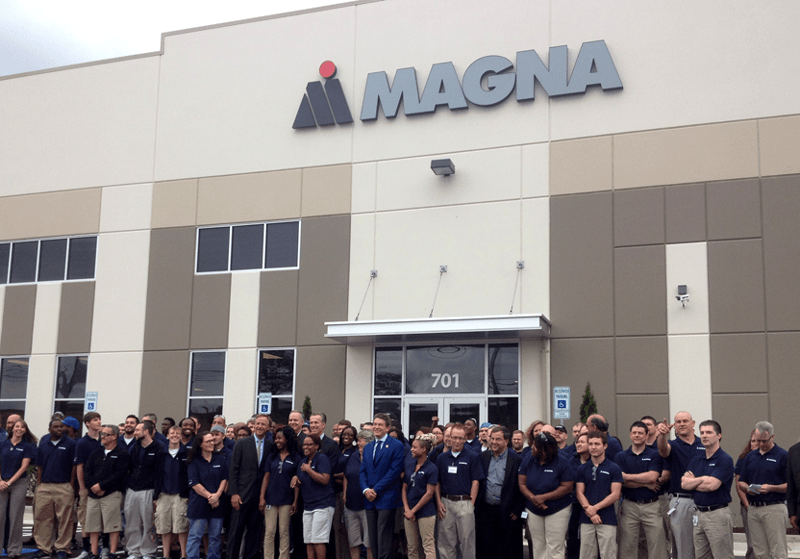 The 122,500-square-foot operation, at 701 Beechcroft Road, is set to bring more than 350 jobs and represents a $17 million investment. The site abuts the Spring Hill General Motors Manufacturing facility. The company is headquartered in Ontario, Canada, but operates other locations around the country and world.

Gov. Bill Haslam attended the opening and said Mangna is following a trend of suppliers that are opening near the original equipment manufacturers they support.

“Automotive is the ultimate synergy business—the more you have the more it brings. It is our hope to keep that momentum going,” Haslam said.

“Every time we bring an OEM into this state, it attracts other suppliers. This helps beget more success,” Boyd said.

The site currently makes headliners and seats for the Chevy Equinox, which is produced at the GM Spring Hill facility, but it will retool to support production for the next generation Cadillac SRX crossover.

The new Cadillac was the reason Manga relocated and expanded in Spring Hill, the site’s General Manager Jeff Fuller said. The company previously was located in Columbia.

“We really tried to do something different here, different than we do from all over the world in Magna, and that’s to build a highly efficient plant, environmentally friendly plant and really have an open atmosphere,” Fuller said. “It’s able to expand for extra business opportunities. We have high hopes for the Spring Hill plant here, in terms of bringing more business.”

Spring Hill Mayor Rick Graham said attracting 350 jobs has jump-started the whole area’s economy. The city will continue to work with Magna and the Tennessee Department of Transportation to redress traffic and road issues surrounding the facility, he said.

“Magna has been an outstanding partner,” he said. “We are just excited to have them in Spring Hill.”