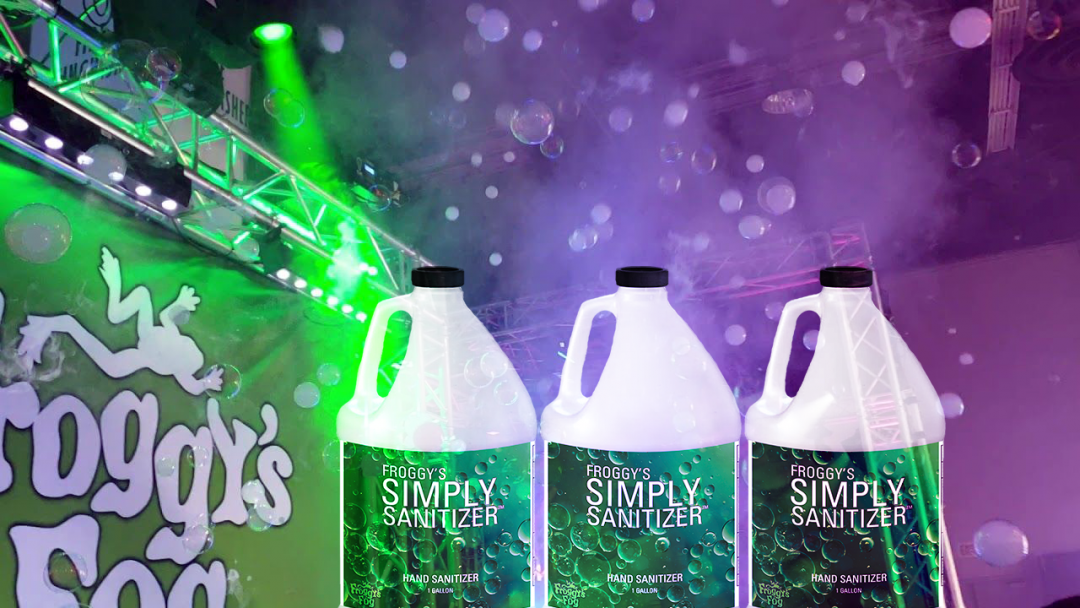 On a normal day, Froggy’s Fog would manufacture over 500 gallons of theatrical effects fluids in its Columbia, TN warehouse. Now they have shifted their focus to help those in need in time of Crisis.  With the rise of COVID-19, a shortage of proper hand sanitizers and chemicals became a reality. It was then that Co-Owners Adam Pogue and Chris Markgraf knew they had the resources to help combat the spread.

“We realized that we had all the main ingredients for hand sanitizer in house and the ability to mass produce and distribute it to the masses.” Markgraf states, “Why not use our resources to help out? We have thousands of dollars of orders we are putting on hold to try and get necessary resources into the hands of those who need them.”

“In the span on 3 days, we created, registered the trademark, and came up with the formula for Froggy’s Simply Sanitizer”, says Markgraf “It was a company-wide effort and we were glad to have the ability to make a positive impact in this uncertain time.  It also gives us the opportunity to keep our doors open and our employees taken care of.”

Since the announcement of COVID-19, Froggy’s has been working around the clock to fulfil orders of chemicals that are common ingredients in hand sanitizers like USP Propylene Glycol, USP Vegetable Glycerin, and TEG (Triethylene Glycol).  With the slowing of Amazon fulfillment, a main distributor of Froggy’s, the small staff has been tasked with fulfilling orders that went from a few hundred a day to a few thousand.

“It’s been really hard on everyone,” Co-owner Adam Pogue says, “but in the long run we know we can help make a difference, even if it is a small one in our community.  We are also ensuring that the inventory will be spread out by limiting the numbers sold to prevent price gouging and profiteering”

With an alcohol content of over 80%, Froggy’s has made a sanitizer with no fluff and exceeds the required 60% alcohol standard set forth by the World Health Organization.  The Base is a premixed formula that adheres to the WHO’s recommendations, requiring the user to simply add the proper alcohol content. Casey Jones, Bluegrass Distillers, Old Glory, and MB Roland are just a few of the distilleries using Froggy’s Simply Sanitizer Base mixed with their alcohol in their bottling facilities to further help with distribution.

“The focus is to get it in the hands of people that need it in our immediate communities.” States Markgraf, “We have relationships and work very closely with first responders, so we wanted to make sure they have enough to protect themselves.  But everyone is welcome to order what they need.”

Froggy’s Simply Sanitizer follows the World Health Organizations guidelines for Hand Rubs and is also CDC compliant.  It comes in a range of 1 Gallon to 250 Gallon Tote.

Pogue, who grew up a stone’s throw from Froggy’s current location in Columbia, TN, continued, “We wanted to help out in the community as much as possible so we will have sanitizer and base available for local pick up at our warehouse as well.  We are very much a family run organization and that family extends far beyond our walls to every family in America.”

You can pick up some of Froggy’s Simply Sanitizer by calling 615-469-4906 or online at FroggysFog.com. For larger orders, please call prior to arrival.

Please be considerate of others and use proper social distancing when picking up.

Called the “World’s Greatest Fog Fluid,” Froggy’s Fog has quickly become the industry leader in special effects.  As one of the world’s first water-based fluids, Froggy’s quickly rose in prominence by offering pharmaceutical grade formulas that are safe for children, plants, and animals offering a fluid and machine for every effect.

Froggy’s has always been focused on the end user, even from its conception. Initially, this was to fulfill the need of the creators to have a natural fog effect that would not trigger the asthma of one of the now owners.  Froggy’s goal has always been to offer a high-quality product with outstanding personal customer service.