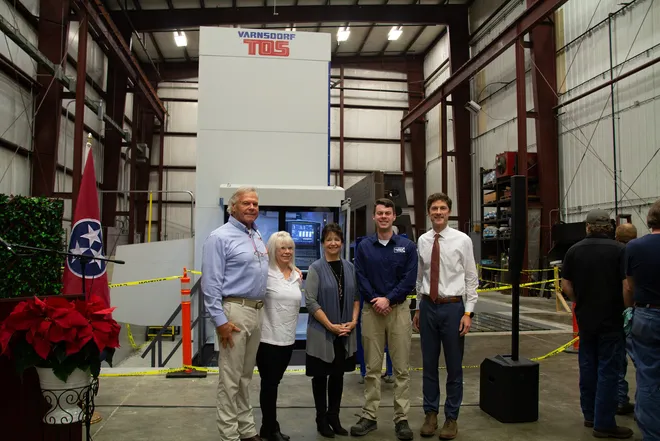 Columbia Machine Works recently held a commissioning ceremony for a new machine tool, the single biggest capital investment in the company’s 95-year history, which will aid in expanding the company’s operations.

The new machine, a TOS Varnsdorf CNC Horizontal Boring Mill — a $3 million investment — gives the business an expanded machining capacity, bolstering its capability to serve its customers’ needs in the industrial repair and contract manufacturing field.

Columbia Machine Works, an industrial machine repair, rebuild and support business, is family owned and has been in operation in Columbia since 1927. The company houses one of the largest CNC machine shops in the southeastern U.S. as well as an extensive fabrication shop that is well-equipped to handle heavy, structural metal fabrications.

Columbia Machine Works Vice President Jake Langsdon IV called the addition of the new machine a “game-changer” for the company.

“We also are no longer limited by weight capacity, so we can machine virtually anything we can get into our building,” Langsdon said. “A new machine with the latest technology also dramatically reduces machining times, resulting in a better service for our customers.

“This is one of the largest, if not the largest, machines of its category in the state of Tennessee, especially so for a ‘job shop’ like our own.”

The operational expansion of Columbia Machine Works aligns with the trend of the growing manufacturing climate in Columbia.

Maury County has become a manufacturing hub in Tennessee rating top in capital investments in 2020, according to think-tank SmartAsset, following the opening of new headquarters in Maury County like tortilla machine-maker JC Ford and Fiberon, a leader in outdoor living products. Meanwhile existing auto giants like General Motors in Spring Hill invested almost $5 billion in expansions over the past two years to accommodate its new electric SUV, the Lyriq, which is run by batteries made by South Korea-based Ultium Cells.

“I would say as we see companies like JC Ford and Fiberon moving in, and also companies like Mersen making major upgrades to the old Union Carbide plant here in Columbia, the manufacturing industry in the city of Columbia and Maury County has never been stronger,” Langsdon said.

“This benefits our company greatly, and we also view ourselves as a business that can play a role in attracting these companies to our city, because we are able to do all of their repair and contract manufacturing work. We are fortunate to call JC Ford, Mersen, Documotion, etc. our customers.”

Columbia Machine Works was founded in 1927 by John K. Langsdon Sr. and has grown into one of the largest job shops in the U.S. The company currently has 75 employees, and its core services include CNC machining, metal fabrication and industrial repair.