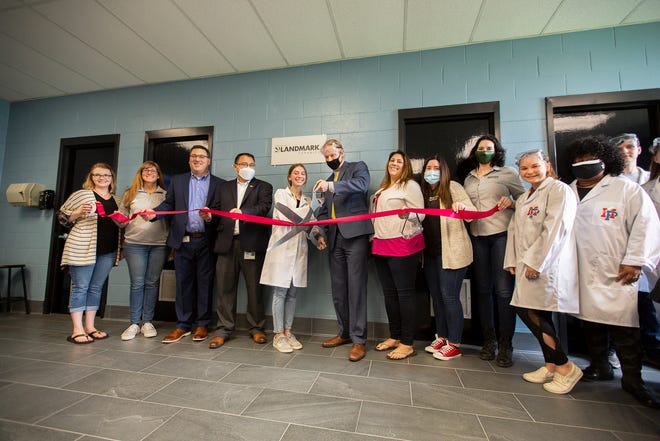 In recent months, the lab was transformed from a deteriorating storage room to a fully-equipped facility with a safety ventilation system, sinks and a full set of materials needed for students to conduct an array of experiments.

“This is going to help us out tremendously,” said Alfreda Beasley, who teaches chemistry and physical science at the high school.

The Landmark Chemistry Lab is the school’s first working laboratory.

“Now I can provide for the kids a real chemistry experience,” Beasley said. “Many kids are hands-on-learners, and this gives them an opportunity to observe and participate. Labs offer an opportunity to make the connection and observe what is taught. Now they have the opportunity to look forward to that.”

Sponsored by Landmark Ceramics, an international tile manufacturer that established its North American headquarters in Mt. Pleasant in 2017, the lab is a result of the growing relationship between the city’s public schools and its community partners.

A portion of the funds for the lab were provided from a $500,000 grant awarded to the local high school in 2017 by the Clark Legacy Foundation, a charitable effort established by CLARCOR, a global leader in filtration systems headquartered in Franklin before it was acquired in 2017 by Parker Hannifin Corporation for an estimated $4.3 billion.

Following the merger, the company continues to support local schools.

“Any time the schools continue to improve that makes us more competitive to attract top talent to the Columbia area,” Ryan Pastrana, vice president of technology and innovation at Parker Hannifin, said.

Mt. Pleasant Principal Ryan Jackson said the program marks another step forward as the high school celebrates its 50th year hosting students and its ongoing initiative to be a premier STEAM school, focusing on science, engineering, the arts and mathematics.

“We are a STEAM school, and we value curiosity, research and science,” Jackson said. “We are also committed to providing our students with state-of-the-art equipment and resources as part of our championship mindset philosophy.”

The designation marks a step forward in the public school system’s ongoing effort to move from the traditional classroom environment to implementing project-based learning and STEAM.

The Mt. Pleasant’s three schools are the first Pre-K through 12 cluster to receive a designation in the state.

“You improve upon what you focus on,” Jackson said. “We are creating an atmosphere that inspires curiosity and inspires critical thinking — it gets kids thinking. We want them to have those opportunities and experiences at a very high level.”