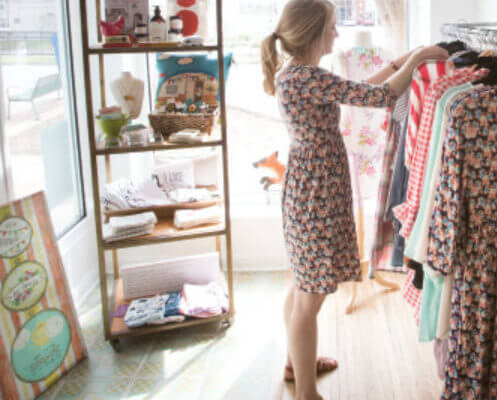 As the old Petula Clark tune once went, “Downtown, everything’s waiting for you,” a promise that’s nowhere truer than in Maury County.

New and relocating businesses, growing dining and entertainment options, wineries and a mix of traditional and new community events and festivals are bringing a newly energized vibe to Maury’s downtowns, bringing locals and visitors alike to the heart of its communities.

“I’ve been saying for the past 10 years that malls, chains and big boxes are going away, as people are realizing that it’s all about local and smaller,” says Lucy Fleming McEwen, who moved her popular Lily Jane ladies’ clothing store to the Columbia square in 2015. “Shopping and supporting small business is becoming important to people. I feel like we’re at the forefront of something good down here.”

The mix of businesses in downtown Columbia includes veteran retailers such as Ted’s Sporting Goods, which just celebrated its 60th year in business, and newcomers like Southern Exposure, an outdoor outfitter launched by two young Columbia natives in 2015. Spaces on the square offer affordability and amenities, such as free WiFi. Entrepreneurial enterprises, such as digital design firm neXpiria are finding a home downtown, as is internationally known record company Putamayo World Music, which recently moved its distribution hub to Columbia from Brooklyn. In addition to Lily Jane, which has tripled its business since moving downtown, Variety Records, Muletown Coffee, Pie Sensations and Old Curiosity Book Shop are drawing enthusiastic customers to the heart of Columbia.

“People here are very happy with their small-town life, but they want to try new things, have new experiences, have new places to eat,” says Shorn Barbers owner Lance Penley, who opened his shop in 2014 and has already built a database of more than 500 customers. “The more things we have for Columbia residents, the more they will stay here and spend their money here. It takes a crowd to draw a crowd. The more people stay here and do business here, the more people will come.”

Downtown Mt. Pleasant is enjoying its own renaissance, with the opening of shops like Sweet Pickins and Too Much Stuff and the launch of an impressive community theater group. Its first presentation, “The Best Christmas Pageant Ever,” attracted enthusiastic audiences in December 2015 and its theater, dance and music programs in local middle and high schools are gaining popularity.

The community’s Mid-South Barbecue Festival in October 2015 brought 7,000 people and 36 barbecue teams from as far away as South Africa to town. The community also came together to construct a new Trail of Tears memorial, devoted to Native Americans in local history.

“For the last 30 years, nothing has been done to them,” says Donna Morency, executive director of the Mt. Pleasant Community Development Corporation. “A local investment group is looking to revitalize downtown, fix the buildings and bring in retail for the people of Mt. Pleasant — places they need to live here and make it a working city. We need the sales tax dollars that tourism generates, but we want it to be a city that people here feel is their city.”

Across Maury County, music continues to grow. Audiences applaud live performances at Marco’s at 822 South and Puckett’s in Columbia, and the Mt. Pleasant Grille. The new Muletown Music Festival offers two days of free music inside and outside businesses along Columbia’s square, and joins such popular events as Mule Day, Mount Pleasant’s Mid-South Barbecue Festival and Spring Hill’s Ham Festival. Also on the community calendar are the Vines and Vintage festival and Swanky Plank Marketplace at Spring Hill’s Rippavilla Plantation, and the Spring Hill Art Walk on Main Street. A different entertainment option is offered at the county’s three flourishing wineries, Natchez Hills Vineyard, Amber Falls Winery and Cellars, and Keg Springs Winery, which hosts tastings and events.