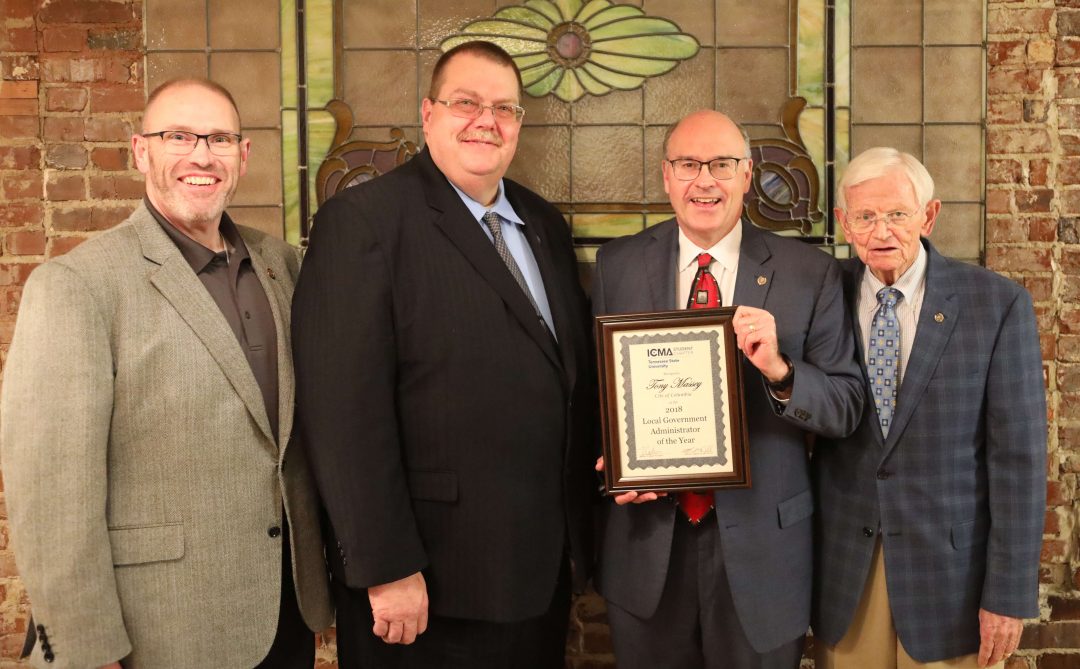 Columbia, Tn (April 19, 2018) – Columbia City Manager Tony Massey has been selected as the 2018 Middle Tennessee Local Government Administrator of the Year. Dr. Anthony Campbell, Professor of Public Administration at Tennessee State University notified the city of the award, which is sponsored by Tennessee State University Department of Public Administration and the university’s ICMA Student Chapter. Massey was recognized and presented with a certificate by Dr. Campbell at a celebration of public service April 18th that took place at the Cohen Loft in downtown Nashville. The event honored public service recipients from state government, nonprofits, and local government and included a keynote presentation by Margaret Norris, Executive Director of MTAS.

Massey worked previously in Bristol, Tennessee and Frankfort, Kentucky before returning to his hometown of Columbia five years ago to serve as the city’s chief executive. Under Massey’s leadership working with staff, the City achieved an ISO rating of one for Columbia’s Fire & Rescue Department. The City also received CALEA certification for Columbia’s Police Department. Massey has been instrumental in establishing an Arts District in Columbia, branding the city and hiring a tourism & marketing director to help establish Columbia as a “destination” city with attractions like the President James K. Polk Home & Museum, Ridley Sports Complex, historic downtown Columbia, the emerging Arts District, and special events attracting visitors.

“Tony Massey has proven himself to be an excellent City Administrator and leader for the City of Columbia and its citizens,” stated Columbia Mayor Dean Dickey. “His professionalism, leadership and vision for the future of this city make it clear to see why he was chosen to receive this award. We are proud of him and pleased that others in this state now have the chance to see what an outstanding City Administrator we have leading this city forward.”

Massey took the lead in bringing the Midstate Classic softball tournament to Columbia that attracts 3,000 to 4,000 people annually and features the University of Tennessee women’s softball team competing against well-known opponents. Other accomplishments include providing a near-site clinic for city employees, improving the old City Hall facility to house the Columbia Police Department as well as other facilities to enhance functionality and citizen usability. Massey is always working to enhance the look, feel and services that are provided to the citizens of Columbia.