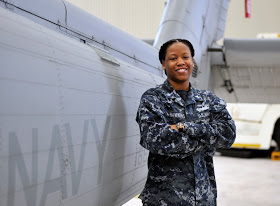 A 2009 Columbia Central High School graduate and Columbia, Tennessee native is serving with a U.S. Navy helicopter squadron that flies the Navy’s newest and most technologically-advanced helicopter.

Petty Officer 2nd Class Alisha Hawkins is a yeoman with the “Grandmasters” of Helicopter Maritime Strike Squadron (HSM) 46, a Mayport, Florida based squadron that operates the Navy’s next generation submarine hunter and Anti-Surface Warfare helicopter, the MH-60R Seahawk. Each helicopter is nearly 65 feet long, may weigh up to 23,500 lbs. (max gross) and can travel over 120 miles per hour for nearly 320 miles on a tank of gas.

As a yeoman, Hawkins is responsible for customer service and assisting the command in keeping up to date with their personal information – essentially a secretary for the command.

“I played basketball and ran track for my schools growing up in Columbia,” said Hawkins. “It taught me to keep pushing and live outside of my comfort zone. Those skills translated perfectly into my current Navy life.”

According to Navy officials, the MH-60R is the most capable multi-mission helicopter available in the world today. It is used for a variety of missions, including hunting and tracking enemy submarines, attacking enemy ships, search and rescue, drug interdiction, delivering supplies and supporting the Navy’s special operations forces.

It is replacing the Navy’s older helicopters because of its greater versatility and more advanced weapon systems.

Hawkins said they are proud to be part of a warfighting team that readily defends America at all times.

“I received my surface warfare pin and my air warfare pins when I was on the USS Wasp,” said Hawkins.”I’m proud of that. I didn’t think I would be able to do it, but I worked hard and now proudly wear both.”

Sailors’ jobs are highly varied within the squadron. Approximately 297 Navy men and women are assigned and keep all parts of the squadron running smoothly.  This includes everything from maintaining helicopter airframes and engines, to processing paperwork, handling weapons and flying the aircraft.

Serving in the Navy, Hawkins is learning about being a more respectable leader, Sailor and person through handling numerous responsibilities.

“The Navy has become my life,” added Hawkins. “I plan on doing 20 years and retiring. I really enjoy my job and I like to travel – and of course the benefits are great.”