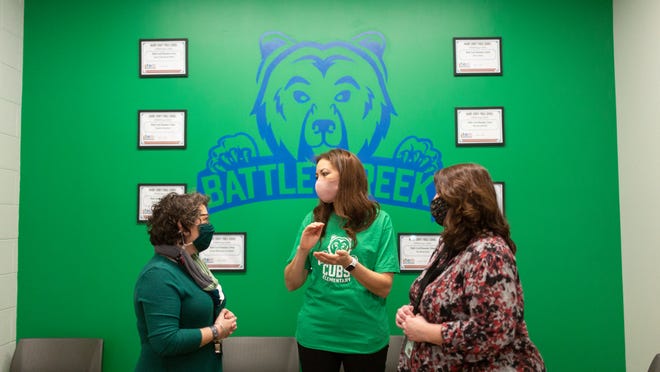 Battle Creek Elementary in Maury County Public Schools is one of 13 schools across the state that has been awarded the Tennessee STEM School Designation for 2021.

The recognition by the state’s department of education and the STEM Leadership Council recognizes public school campuses in their commitment to teaching STEM and/or STEAM (science, technology, engineering, arts, and mathematics) and integrating strategies that prepare students for success in post-secondary education and their future careers.

It is a unique approach to teaching and learning that fosters creativity and innovative thinking.

“It is an honor to be selected for STEM School Designation, and I am incredibly proud of the STEM culture we have established during our first two years,” said Principal Laura Duncan in a press release shared with The Daily Herald.

“Our students, teachers, and staff are working hard to bring our mission to life as an innovative, collaborative community where all learning is connected to solving real world problems using communication, creativity, critical thinking, and character building.”

She said the school’s teachers realized that the campus “had the potential to be larger than the walls that surround it.”

“It would be something different from any other school, not only for its innovative build, but innovative mindset,” Reaves said.

The campus, opened in 2019 alongside its neighboring Battle Creek Middle School, was specifically designed to provide students with an environment that would foster collaborative project-based learning opportunities that would bolster students’ understanding with a curriculum designed to foster the skills needed to overcome the challenges of the future.

“Instead of simply learning to read and do arithmetic, teachers and students put into practice the academics they learn to solve problems and make a difference in their world,” Reaves said. “We are seeing students become more motivated with this approach by allowing them to be creative and harness their talents of presenting, communicating, organizing, and giving/receiving feedback from their peers to attack problems they are passionate about solving.”

The new designation received praise from Sen. Joey Hensley, R-Hohenwald, who serves as a member of the Senate Education Committee.

“With an increase in the number of high-tech companies doing business in Tennessee, a STEM education is more important than ever,” Hensley said in the press release. “The skills gained from a STEM education will give these students valuable skill sets to be successful.”

“A skilled workforce demands investing in education at every level,” Cepicky said. “I am thrilled to see Battle Creek Elementary recognized for their strong commitment to addressing college and career readiness for all students. I congratulate the faculty and staff for this outstanding achievement, and I appreciate their continued partnership.”

In recent years, the school district earned the state’s lowest ranking in the categories of literacy, numeracy and social studies.

In 2019, MCPS received an overall ranking of Level 1 through the Tennessee Value-Added Assessment System, a composite score that measures student growth each year. The district has maintained that ranking since 2017.

The district’s achievement success rate, 24.4% during the  2018-19 academic year, was significantly below the state average of 36.4%. However, the district’s success rate increased by approximately .2% compared to the preceding school year.

According to the latest reports of student performance released by the state, Maury is one of seven counties that fall in the bottom 5% percent of all districts across the state. These districts have been designated as “In Need of Improvement” by the state.

The state’s latest report indicates 26% of the county’s more than 13,000 students are economically disadvantaged.

A Growing Network of STEM Campuses

The designations come at a time when the academic performance of Maury County’s students continue to lag behind that of the state.

Battle Creek Elementary School joins at least four other campuses in the school district that have earned the designation.

The designations indicate continued momentum in the school district’s ongoing effort to move from the traditional classroom environment to the new way of learning that emphasizes critical thinking and problem solving over traditional retention.

State’s department of education indicates the  Tennessee STEM School Designation provides a “roadmap” for schools to successfully implement a STEM and/or STEAM education plan at the local level.

Schools that receive the Tennessee STEM School Designation serve as models from which other schools may visit and learn. All K–12 schools serving students in Tennessee are eligible.

“As part of his Future Workforce Initiative, Governor Lee set out to triple the number of STEM-designated schools in Tennessee by 2022, and we are thrilled to see schools receive the Tennessee STEM Designation,” said education commissioner Penny Schwinn, in a press release.

“STEM education not only engages students with real-world problem solving in the classroom but provides them with the opportunity to develop creative and critical thinking skills that will prepare them for post-secondary success. We know STEM-related jobs are in high demand, and as a state, it is so important that we give all students the tools they need to be successful in the 21st century economy.”

Each school that was awarded the Tennessee STEM School Designation was evaluated through a rigorous application process. Schools were asked to complete a self-evaluation, participate in interviews, and host site visits with the Tennessee STEM Designation review team. The designation rubric included five focus areas: infrastructure, curriculum and instruction, professional development, achievement, and community and post-secondary partnerships.

Since 2018 when the program began, 61 schools have earned the recognition.