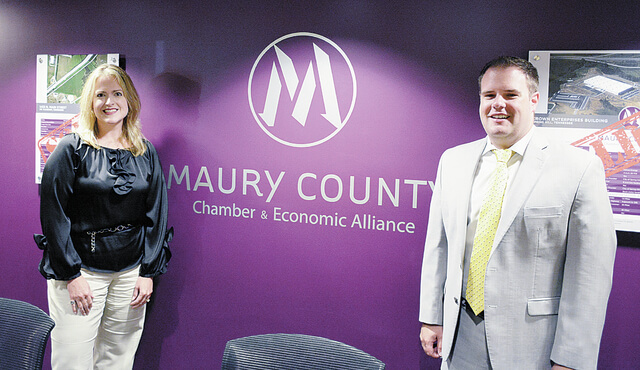 From The Columbia Daily Herald – Tim Hodge
The Maury County Chamber and Economic Alliance is joining forces with the school system to launch a campaign aimed at promoting education as a top community priority.

The endeavor will be funded by private companies and not with taxpayer dollars, MCCEA President Wil Evans said.

“Quality of life is playing a more important role in economic development and recruitment than it has before, and part of that is the quality of education in a community,” he said.

Young talent tends to move into places where they feel their children will get a good education, which can improve the area’s workforce, Evans said.

The campaign provides an opportunity to enhance and improve the perception of education — a move that will benefit the community as a whole, not just the school system, he said.

“We are not telling anybody how, or what, to do,” the MCCEA president said. “We are really doing this to raise awareness of the importance that education plays in the community.”

The initiative is aimed at helping the school system, community and business leaders get on the same page, she said.

“The success of our community depends largely on the success of our school system,” Johnson said. “We want to foster any positive partnership that we can get. I see it as a real energizing activity.”

Johnson stressed that the school system is the ultimate decider on what is best for students, and the private monies will not affect its decision-making process.

The MCCEA also volunteered to donate private money to aid with the search for a permanent schools director.

Johnson did not have an exact donation amount immediately available and said those numbers will be finalized when the director is chosen.

“I think we all desire the same outcome, and that is to have educated, prepared citizens that are ready to enter our workforce,” she said.

Maury County native Mary Beth West is orchestrating the campaign. She is a product of the Maury County schools system, having gone from Riverside Elementary to Columbia Central High School. The MCCEA hired her firm to spearhead the effort.

“From a personal standpoint, the campaign is meaningful to me for the reason that this is my hometown,” West said.

The company will issue data-driven reports to measure the effort’s outcomes, she said. Those results will be shared with the community later this year.

“This is not a campaign about the business community trying to tell the teachers how to do their job better,” West said. “This is all about being collaborative and really trying to change the level of conversation in the community so that everyone gets more on the same page about why education is important.”

A campaign unveiling is scheduled for 2 p.m. July 29 at Spring Hill High School — the same day as the school system’s administrative in-service day. It will run through November with plans to become a long-term campaign into 2016.